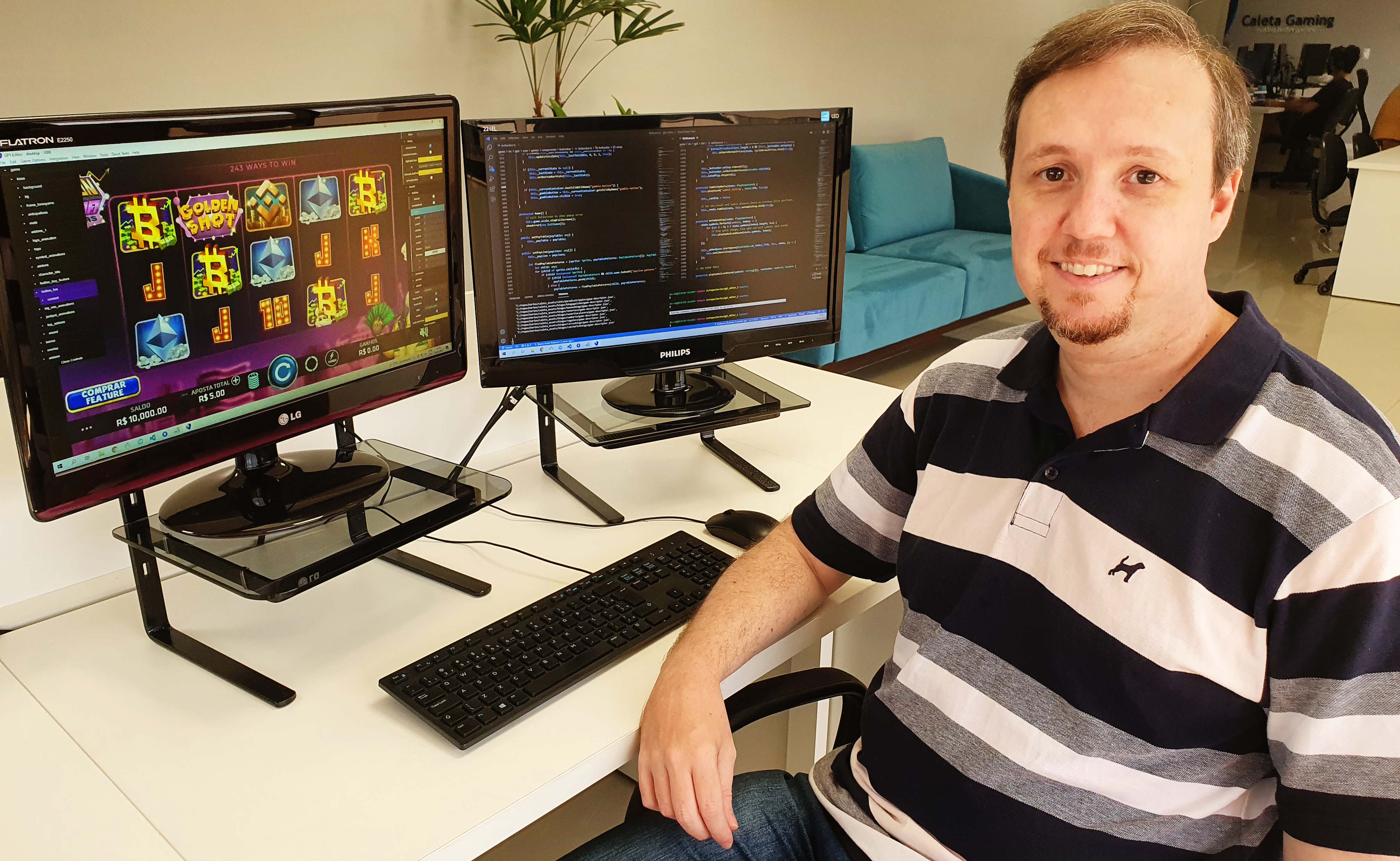 Guilherme has been working at Caleta since 2017 and helped the company to deliver more than 80 games worldwide. He has a background in digital games and eight years of experience in gaming development. In this interview, he shares his experience and responsibilities as a game programmer in the online casino industry.

How did you get started and how was your path to becoming a game programmer?

It all started when I was taking a computer network course and had very light contact with a programming discipline. So, when I found out that there was a digital games course in my city and that it was more focused on programming, I decided to make the switch. During the game development course, I got an internship at one of the biggest game companies in Brazil as a game tester, and later migrated to gameplay programming. After that, I never looked back.

Was working in the game industry something that you always wanted?

Not at first. I knew I wanted to work with IT, but games didn’t even cross my mind when I started studying. Around 2010, a friend told me about this newly created course in this area. I realized that it could be a good area for the future although there were very few game development companies in Brazil. It was a bet that paid off. Nowadays, we have several successful companies in this sector, and many people graduate every year at several different universities.

What are your responsibilities and daily routine as a game programmer?

My main responsibility is to bring to life games and features created by game designers and artists. For this to work, we first meet to align the details of the project, and whenever necessary, we have other meetings. I spend most of the day programming and debugging, maintaining constant communication throughout the development process.

We created our game engine – called Caleta GP5 – in HTML5. GP5 enables us to make games much more agile than before, and we can test locale, integrations with operators, currencies, UI layouts, and jackpot campaigns, to name a few. We use the Phaser framework and Typescript language for the front-end. On the back-end, we use the Python language with the Django framework.

What is the most challenging problem you’ve had to solve while developing a game?

As our games are made for the web, making them run well on as many web browsers as possible, both on mobile and desktop, with the UI adapted for a better experience depending on the type of device used, is a big challenge. Another challenge I have gone through in my career is imposter syndrome. I believe that this is a relatively common problem in our area. It was undoubtedly the most significant challenge that I overcame.

What do you think is the most rewarding thing about working in a game company?

It’s very satisfying to see players having fun with the games we’ve created. All the games we make involve many people, the concept, marketing, production of assets and code, launch, everything. It is an accomplishment to interact with the team to make decisions and see how the public receives our games.

What advice would you give to newcomers wanting to get into game development in the gambling industry?

There is not much difference between gambling and games in general for the programming area. I advise them to study hard, know more than one programming language, and choose one to dive deeper. Study game engines like Unreal, Unity, and Godot, which are very popular. Understand which branch to follow, such as back-end or front-end. And, of course, create a portfolio with finished games, even if they are small. For our gambling area, I believe that you are already ahead to get a spot as a junior dev if you have implemented a slot or bingo game, for example.