Caleta Gaming, one of the Brazilian game developers that has stood out in Latin America and conquered spaces in the iGaming industry in different parts of the world, has just received the recognition that was already being perceived for its performance. The company was nominated in the Bingo Supplier category for the EGR Awards 2021, which are considered the ‘Oscar’ of the gaming industry. The virtual event will take place next July 6th and 7th. 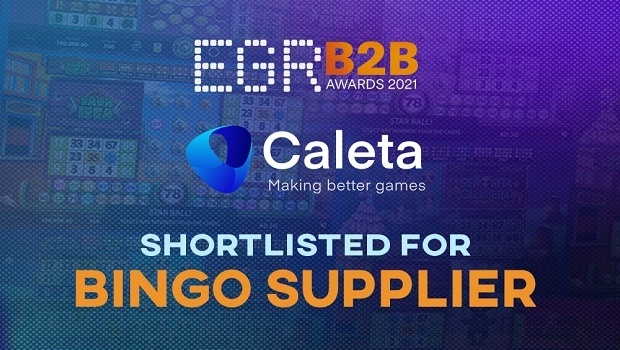 EGR rewards and celebrates the best providers in the online gaming industry, recognizing the achievements of suppliers from all major disciplines in the industry. In the “Bingo Supplier” category, Caleta is included in the list of nominees with Pragmatic Play, Dragonfish, ELBET, NSoft, Playtech, Relax Gaming and Vaix.

Founded in 1993 in Santa Catarina, Brazil, and with an office also abroad, Caleta Gaming has achieved important results over the last few years and has occupied more and more spaces both in the national scenario and in the international iGaming market. Currently with more than 70 proprietary games developed on its GP5 platform, the company has stood out for having an excellent development team, with high creativity.

To meet the high demand for its games in several jurisdictions, Caleta Gaming has already translated its entire portfolio into 12 different languages. All Caleta games are available in English, Portuguese, Chinese (traditional and simplified), German, Japanese, Korean, Russian, Spanish, Thai, Turkish and Vietnamese.

Despite the complications generated by the pandemic, the company experienced an important growth during 2020, the year where it delivered about 35 games, completed more than 15 integrations and certified 16 of its main titles for the Colombian online gaming market after a trial process complete with BMM Testlabs.

All of this drew the attention of the world gaming market, culminating in the nomination of Caleta Gaming for the award in the bingo category of the EGR Awards. Regarding the nomination, Fabíola Jaeger, CEO of Caleta Gaming, says that “are the result of the extreme dedication and commitment of a brilliant team, built on values, culture, and corporate leadership.”

The EGR Awards event will take place over two days of virtual content and awards ceremony, in addition to a face-to-face experience. It will be on the afternoons of July 6th and 7th, with the face-to-face event taking place at the exclusive York Lawns, in Regents Park, London, in the early evening.

“We always believe we could be the best Bingo Provider and we are on the way to…It is just a matter of time,” concluded Jaeger.