With Fabíola Jager, CEO of the Brazilian Caleta Gaming, as the moderator, and presence of Hugo Baungartner – Commercial Director of the company -, and Fernando Garita – Director of Business Development at Betcris -, the virtual panel “Latin America: The untapped opportunity” of the iGaming series Next POWER Hour, addressed the opportunities in the Brazilian market, new sponsorships and the evolution of online gaming in LatAm. For the executives, the regulation of the gaming sector in the country may be about to happen. Watch the panel video (English). 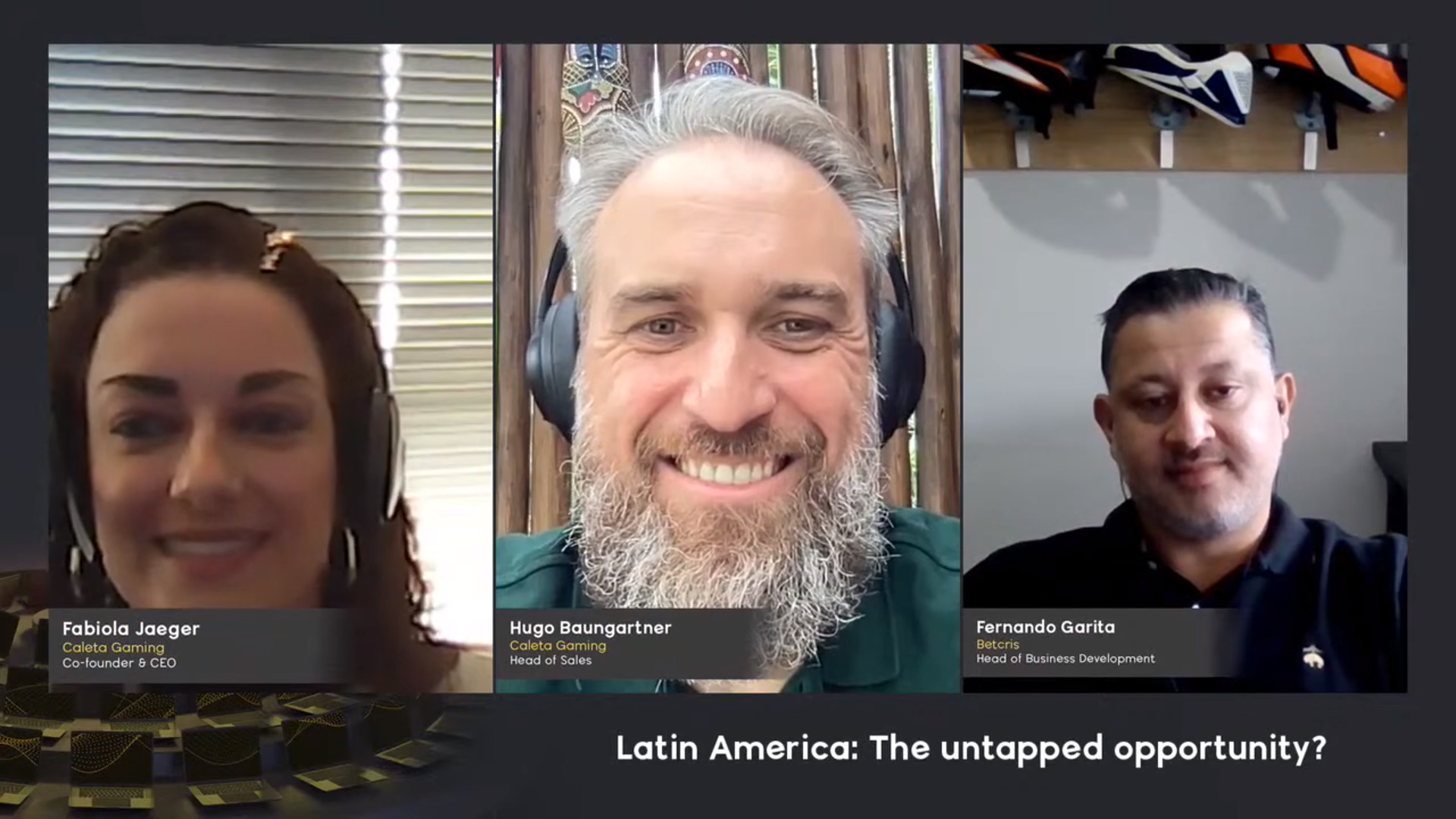 After introducing herself to subscribers in the virtual webinar, Fabíola Jager, CEO of Brazilian Caleta Gaming, presented the debate participants, Hugo Baungartner, Commercial Director of Caleta Gaming and COO of RCT Gaming; and Fernando Garita, Director of Business Development at Betcris.

To both, she reminded them of the taboos for the regulation of gambling in Brazil, often associated with money laundering and addiction, while there is great opposition to the activity for religious reasons. But she highlighted that “while the illegal market continues to operate at full force in Brazil without generating any benefit to society and offering countless risks” for not adopting clear rules and submitting to what is adopted around the world where the activity is legalized.

After this introduction, she asked Hugo and Fernando about what they think of this Brazilian reality. “Why does a country like Brazil remain outside the regulated market?”

Hugo Baungartner, a professional with more than two decades of experience in the Brazilian market, highlighted the immensity of Brazil and that it offers countless opportunities. “I’ve been in this market for 25 years fighting for the regulation of the activity. From my perspective, the mindset of legislators is changing, and I think that Brazil is about to have the activity legalized. The society’s own mentality is also changing, and this could lead to a brief regulation in the country,” he said.

According to him, there is already a law for sports betting, still lacking in regulation, but “it is about to happen. It will happen, we are on the right path. We just don’t know when it will be, but it will be.”

Fernando Garita, Director of Betcris, another market specialist with more than 20 years of experience in the gaming business, said: “We hope that regulation will happen soon. We are focusing very consistently on the Brazilian market, which is still deeply rooted in lotteries, which is widely accepted by society.” For him, the regulation of sports betting and online gambling is heading towards a good end. “In the coming years there will be a great transition thanks to a new generation, which accepts sports betting and online gambling much better,” which will help in the definitive direction of a regulatory process.

The growth of Brazil’s market, sponsorships and LatAm “help”

Fabíola highlighted the rapid growth of the market throughout Latin America, which ends up having repercussions in Brazil as well, initially in terms of sports betting. “We know how much Brazilians love sports and especially football and I remember that today the main bookmakers are sponsors of the most important football teams in Brazil. Betcris itself is a leader in this segment and is heavily involved,” he said.

Fernando Garita commented that “for years, sports betting companies have been sponsoring the sport, especially in Europe, so there is nothing very new to be done, but adapting to the reality of Latin America and Brazil.” According to him, it is important to understand what Brazilians like and this is not limited to football, but also to other sports, such as volleyball and basketball. “I believe that the betting companies’ achievements with sponsorships are not limited to them, due to the excellent brand exposure, but also to the benefit of the sport, the sponsored clubs and customers,” he highlighted.

Hugo highlighted that many companies like Betcris are coming to Brazil to sponsor teams and championships, which is important for the sport, and we also see a lot of sponsorship for other championships, such as Copa América, Eurocopa. “Unfortunately, we still don’t have regulations and that’s up to the government. They need to get involved because companies are here to stay and they need to follow the regulations to be defined for Brazil,” he said.

Fabíola said that Brazil is in a transition phase, at the same time that countries like Colombia, Argentina and Mexico have already positioned themselves in the market. He asked why Brazil only allows lotteries and still does not authorize casinos and bingos.

Hugo said that when he started operating in Brazil, there were only bingos, but “unfortunately they were under a weak law, and this ended up leading to the extinction of the activity. The illegal market remains strong, while lotteries remain the only authorized vertical in the country and administered by the Union. Based on the dimensions, we can say that we have 27 different markets within Brazil, with a new movement of companies with possibilities to explore the activity in the States showing them what the lottery is and its strength in a market hitherto dominated by Caixa Econômica Federal,” he commented.

As for bingos and casinos, Hugo said he is positive about a possible regulation of these verticals after sports betting is regulated. “For the government there is no advantage in not regulating, first sports betting and then other activities.”

Garita added that “it will be an achievement for the country to regulate the market as a whole, as countless companies develop several games and online options. This can be opened to other sports in all states, as it is an extremely strong market and ready to contribute to society, which loves to play.”

Garita said that from the point of view of the regulated online market, there are guidelines for all players, as a way to reinforce the concept of responsible gaming, as well as self-exclusion, in case of detection of problems in players. “We follow all the regulations that involve this issue and we insist on applying a series of actions to have healthy players and we always work to reinforce responsible gaming, both individually and through our associations and in compliance with legal requirements,” he explained.

As for land-based gaming, Hugo pointed out that “the Brazilian government is unable to track players and predict money laundering or gambling addiction, but they need to understand how to do this through a very close relationship of operators. In Mexico we have a series of requirements, norms and ways to act to prevent possible harm to people and this is very transparent and has excellent effects. If this is possible in banks, for example, tracking suspicious transactions, it can be done in our sector. There are many tools for this.”

Taking advantage of the moment when the pandemic is still compromising the economy around the world, Fabíola asked the participants what they think about this moment.

Garita said that the gaming regulation process could contribute to the economic recovery. “Colombia itself, with regulation, is becoming a tourist destination and regulated gambling is a strong generator of jobs, not only in the land-based market, but also in the online one, with programmers, developers, people working in marketing and in the commercial area. All of this generates wealth, formal jobs and taxes for the government,” he highlighted.