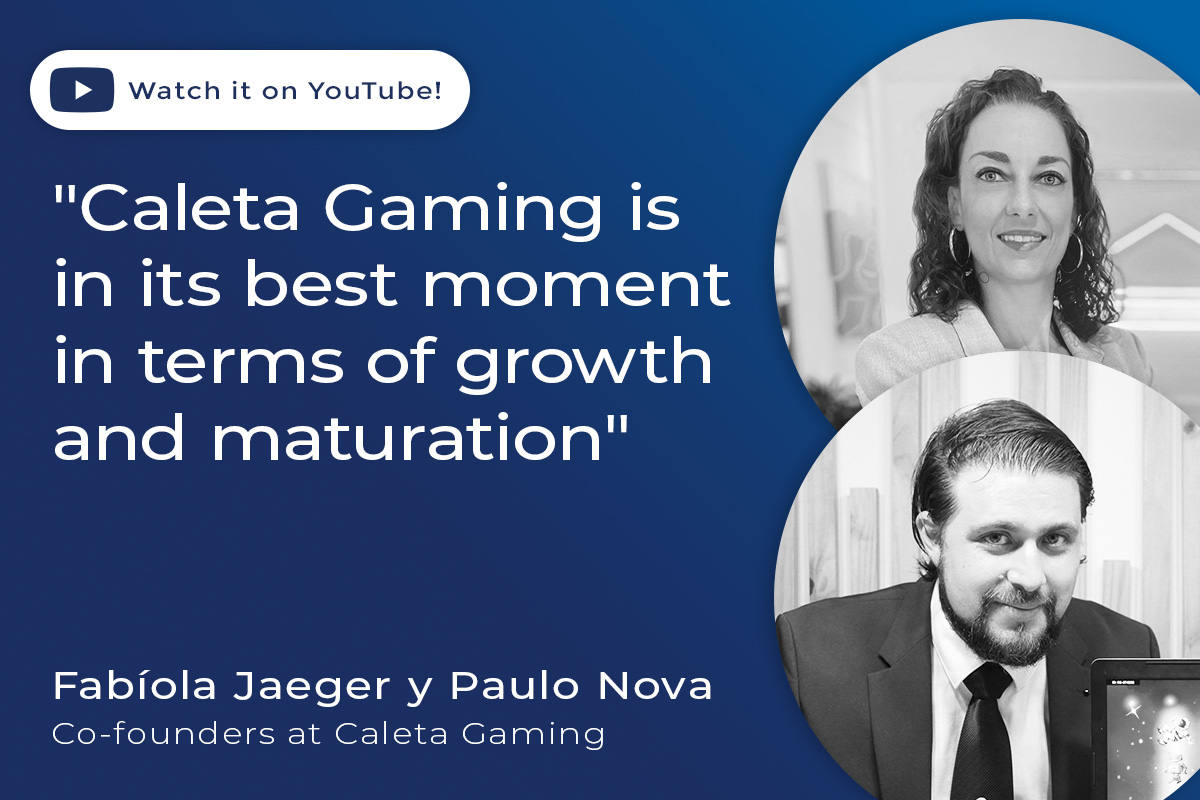 Exclusive interview.- Fabíola Jaeger and Paulo Nova have become a formidable team after meeting in the gaming industry. Seeing that they had complementary skills, they set up Caleta Gaming in 2013 and have seen the company grow from strength to strength. They took time out to speak to Focus Gaming News from Florianópolis, Brazil, about how they began their journey and where they plan to take Caleta Gaming next.

Nova, CTO of Caleta Gaming, graduated in game design in São Paulo in 2006 and gained industry experience in bingo with Shock Machine. CEO Jaeger graduated in information systems and has been in software development for about 20 years, but specifically became involved in creating and testing mathematical models for casino games. The two met at a company in Florianópolis and clicked due to the shared vision of the gaming sector’s potential.

“I was good at front-end creation, and she had the knowledge to do the maths, so we decided to combine these talents and work on a project which resulted in Caleta’s creation,” Nova says. “We both love games and saw big potential in this market, so we decided to set up our own business,” Jaeger adds.

Caleta has grown considerably but it began with just the two of them. “We had to do a bit of everything, tasks we knew as math, game development, and tests, and tasks we didn’t know such as business management, financial, commercial, marketing, art, sounds – you can check some voice-over sounds with Paulo’s voice on our games,” Jaeger notes.

“It was challenging but it allowed us to learn a lot about the market. I believe this is one of the reasons why we have a very efficient and effective team today, as we know exactly what needs to be done and improved in each area of the company.”

“Caleta Gaming is synonymous with agility and efficiency”

So what does Caleta Gaming represent today? It provides a gaming platform with the end-to-end technological domain and also supports game integration from other companies on its own RGS. It has around 100 games in its portfolio including the recently launched Paradise Trippies, an NFT-based slot, which not only uses NFT artwork as game assets but also rewards players with exclusive NFT art pieces that have the potential to increase in value.

Meanwhile, Caleta partnered with Golden Rock Studio, adding its games to the platform. The company is also improving its RGS by optimising the code and adding more features like collectables, engagement tools and NFT prizes.

“Caleta Gaming is synonymous with agility and efficiency,” Nova says. “We work not only to make better games, but also create tools that optimise our time, like GP5, a proper gaming engine built by ourselves that allows us to develop casino games with quality and agility.”

Another recent project, with Gamdom.com, is the Slots Battles feature that allows players to compete and the player who wins the most takes all the winnings. There’s also Gamdom Strike, a CS: GO-themed game where players can change teams while playing.

Meanwhile, Caleta’s video bingo vertical has become particularly strong. Caleta Gaming was named Best Video Bingo Supplier at SAGSE Ranking in March and has been shortlisted in the same category at the EGR Global B2B Awards.

“Caleta Gaming is in its best moment in terms of growth and maturation.”

Caleta Gaming has picked up its first provider licence in the Bahamas, and we can expect to see more moves to enter regulated markets.

“Besides producing new games, we want to increase our presence in the regulated markets,” Nova says. “We’ve been working on a certification plan to cover some jurisdictions and hope to conclude this process in a few months.”

Caleta Gaming’s other big focus is on innovation, and in this area, it is forging associations with strategic partners – as we’ve already seen in the joint venture between Caleta, Paradise Trippies and Bitcasino. Stay posted for news in this area soon.

In the meantime, readers can catch up with Caleta Gaming at the Brazilian Igaming Summit in São Paulo at the end of June (Stand 24) and at the Yolo Group Partner Workshop in Tallin, Estonia, in July.