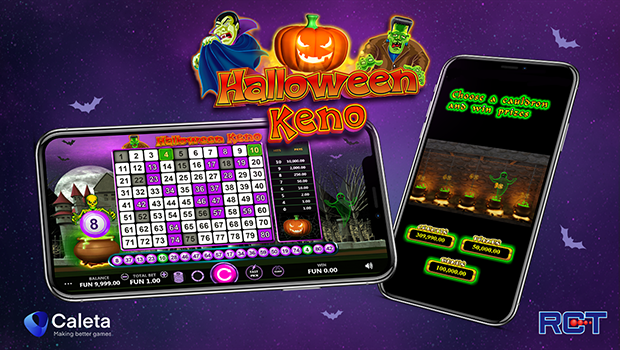 A few months ago, companies Caleta Gaming and RCT Gaming announced that a Halloween family of games would be released. After the recent launch of Halloween Bingo and Halloween Scratchcard, now it is its little brother’s turn: Halloween Keno. “With the sounds, math, bonuses and original assets, this new game family is emerging and conquering many players,” said Luís Proença, Product Owner at Brazilian Caleta.

In Kenos, 20 numbers are drawn from the 80 available. The more numbers drawn match those chosen, the greater the prize amount. In the mathematical model of Halloween Keno, if the last number drawn is the one that completes a prize, the Bonus event is activated, which can multiply the winnings up to 6 times.

Luís Proença, Product Owner at Caleta, commented: “The already consolidated success of Halloween, not only in Brazil, but throughout Latin America, inspired us to create a family of games based on the original, the Halloween slot. With the original sounds, math, bonuses and assets, this new game family is emerging and winning over many players.”

Hugo Baungartner, COO of RCT, added: “Unfortunately there are many non-original copies of Halloween on the market, including the illegal market, which does not represent us. We are proud to say that Keno Halloween, as well as the original Halloween online slot, and the rest of the family, were developed exclusively through the Caleta & RCT partnership. Anyone interested in having them on their website can contact us.”

Brazilian game developer Caleta Gaming, which has been growing exponentially in recent years, ratified its great moment by being nominated in May this year in the category ‘Best Bingo Game Supplier’ by the EGR B2B Awards 2021, an award considered as the Oscar of the casino gaming industry.

RCT Gaming has been a developer of platforms and solutions for physical gaming operations for over 20 years. With a strong presence in Latin America, the company has also paid special attention to the Brazilian market, where it was born and created several game solutions for bingos.

The partnership between Caleta and RCT was completed in 2019 and, since then, eight games have been released. Due to the huge success of the partnership, there is much more to come soon, say the directors of both companies.